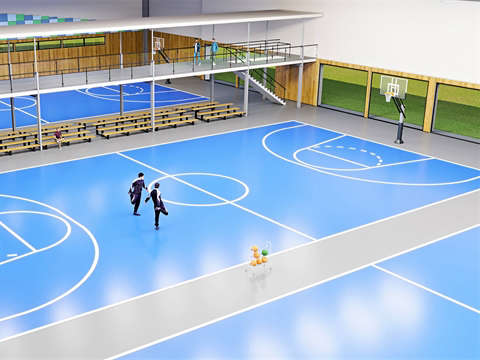 The rugby union recently announced it had made a "close to six figure" donation to the project.

Mr Jackson said the union was proud to support it, and wanted to reignite community enthusiasm and fundraising efforts for the project. He felt enthusiasm had been "diminishing" in recent months.

"We are, like all sporting organisations, super enthusiastic about the centre and 100% behind it," he said.

The union backed the project because it saw its potential to benefit all sports in the district. Because of Oamaru’s central location, it could become the "tournament capital" of the South Island.

"Rugby sees the massive sporting and economic benefits that this new centre will provide for our community," Mr Jackson said.

Mr Jackson and Mr Prescott believed the Waitaki Event Centre Trust was doing a "fantastic job" at fundraising, but they called for more communication from the Waitaki District Council regarding progress and plans for the project to help keep up the momentum in the community.

In a 2011 seismic assessment of the grandstand, it fell below the 34% new building standard threshold, at 15%. The estimated cost to earthquake strengthen the current grandstand was $1million.

Waitaki District Council recreation manager Erik van der Spek said the grandstand was still fit for purpose, but it would require work in the next 35 years to bring it up to above 34%.

The grandstand was not a "must have" in the original business case for the event centre, and the projected cost to include it was $3.8million, Mr van der Spek said.

A refinement of "must haves" and "nice to haves" was being worked through with the project board at present, he said.

"The prime consideration is the ability to raise the necessary funding.

"We are currently working with the Waitaki [Event] Centre Trust and key funders to determine whether this becomes part of the scope for this project or will need to be considered later."

Asked if the North Otago Rugby Union would honour its funding commitment to the event centre if the grandstand was not included, Mr Jackson said the union could not "comprehend" it would be built without a new grandstand.

"To not incorporate a new grandstand would be ludicrous and horribly short-sighted," he said.

Mr van der Spek said the council did not believe community enthusiasm was diminishing. The community remained excited about the project, and had been kept informed through Waitaki Mayor Gary Kircher’s updates in his mayoral reports, and the Waitaki Event Centre Trust’s ads in the Oamaru Mail , he said.

"As we progress, there will be more information, updates and engagement. There is a lot going on behind the scenes with the Waitaki [Event] Centre Trust engaging with businesses and organisations," he said.

The focus at present was supporting the Waitaki Event Centre Trust to secure the funding necessary to deliver the project, he said.

"Until funding applications to Otago Community Trust, Lotteries and possible support from Government is determined, the project board won’t know what budget it must work within," he said.

"Until we know we have achieved the funding target, there will not be much to update on. As we move beyond this phase, we will have more to talk about."

Waitaki Event Centre Trust spokesman Kevin Malcolm was thrilled $21.5million had been raised so far, and "delighted" by the rugby union’s donation and overall community support.

A "very intense" plan was in place for the next eight months and there was still plenty of fundraising work to be done, he said.

"The key to enthusiasm will be the council announcing it’s being built locally and we’re very close to getting working drawings done."