Call for council to sort out Oamaru's gull problem 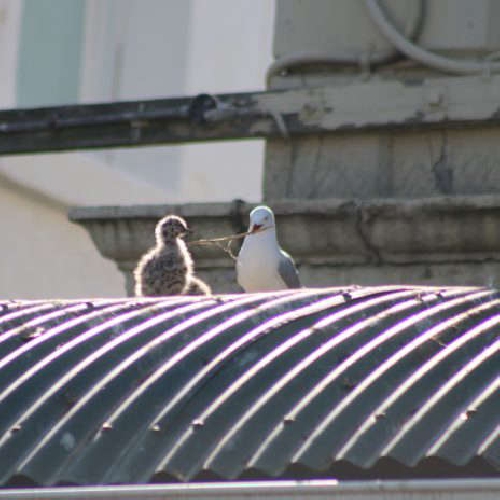 A seagull builds a nest for a chick in Thames St last week. PHOTO: WYATT RYDER

Red-billed seagulls inhabiting the centre of Oamaru have once again drawn the ire of the public and the council is being called upon to prevent nesting next year.

In August, the Waitaki District Council and the Department of Conservation called on building owners to take steps to prevent gulls from nesting in the centre of town.

Despite the call for action, hundreds of birds can still be seen nesting in the gutters and alcoves of local businesses.

Red-billed gulls are native to New Zealand and protected under the Wildlife Act, which means their nests cannot be moved once eggs have been laid.

Paul James Meehan moved to the town 18 months ago from Queenstown and believes the birds are ruining Oamaru.

The overwhelming number of gulls along with the sight and smell of their excrement "completely detracts from the beauty" of the town, he said.

Buildings around town looked like they had "bales of hay" stuffed into their gutters and were "spoiling the whole atmosphere".

He understood the seagulls were native birds, but other coastal towns and cities did not have the same problem, and believed the council was not doing enough to solve it.

"If this was in Queenstown it would be actioned immediately.

"The birds would take second place."

Leaving the responsibility to building owners was not enough, as it would take a co-ordinated push to remove all the birds at once to stop them nesting elsewhere in town, he said.

Waitaki District Council regulatory manager Andrew Bardsley said there had been a reduction in the number of birds in the Thames-Meek St area since building owners installed motion-activated sprinkler systems.

The council had contacted building owners over the past couple of years and given them advice on how to deter gulls, such as using sprinklers and removing nest material before eggs were laid.

The council had received a single seagull-related complaint this year.